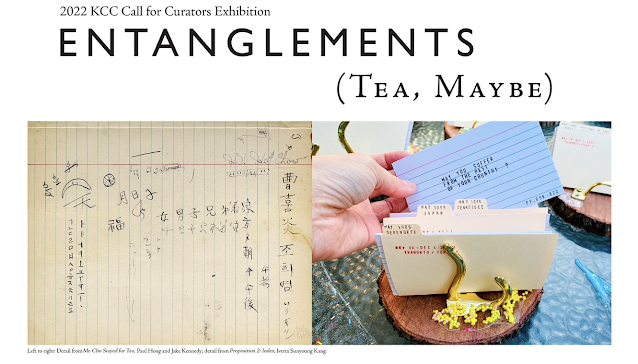 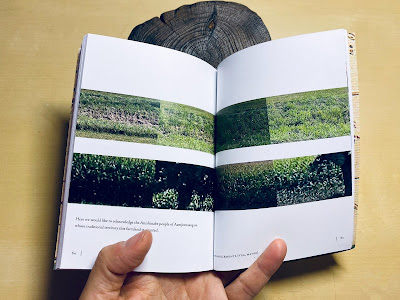 Entanglements (Tea, Maybe) offers kinships and friendships with propositional imaginings of our transcontinental pasts, presents and futures. Where there are national borders to cross, such as those of Canada and Korea, identities are itching to emerge, escape, to straddle, to return, to move back and over and under and across time, languages, and ways of knowing lands and people. Paul Hong, Jake Kennedy, Ivetta Sunyoung Kang, and Paola Poletto offer you tea, maybe, a gathering space to chill, play and sift through the index cards, graze and moo. The project presents three works including a creative bookwork entitled Mr. Cho Stayed for Tea, by Paul Hong and Jake Kennedy. Inspired by the farm journals of Mary Stewart, a farmer in 1920’s Southwestern Ontario, and a single endpaper entry found within them, written in Korean by Mr. Cho, Hong and Kennedy have researched personal and historical archives to write out the remarkable life of Mr. Cho. In Proposition 2: Index, Ivetta Sunyoung Kang shares a series of propositions by considering all the maybes and might words found amongst late 1980’s and 1990’s National Geographic magazines as a way to push up against the magazine’s colonial lens. A final work, Entanglements, brings the artists together to trouble with our understanding of and being in migration and land ownership, and to linger over these metaphorical and physical entanglements.

Paul Hong is a writer of short fiction with a background in cultural anthropology, mass communications and information science. He is the author of Your Love is Murder or the Case of the Mangled Pie (Tightrope, 2006). His stories have also appeared in various literary journals and anthologies, including Toronto 2033 (Spacing, 2020), and Ghosts of Monsters (OOL, 2020). Born in South Korea, Hong lives in Toronto with his family.

Ivetta Sunyoung Kang (she/they) is an interdisciplinary artist based in Tkaronto/Toronto and Tiohtià:ke/Montreal on the land now called Canada. Her work has been presented at Sound Scene in partnership with the Smithsonian Hirshhorn Museum and Sculpture Garden (2022), Xpace Cultural Center (2020), Arlington Arts Center (2020), among many. She was in residency at AGO X RBC Artist-in-Residence (2022), ZK/U Berlin (2022) and DAÏMÔN (2019), among others. She has been awarded the RBC Newcomer Arts Award (2021) and was shortlisted for the Simon Blais Award (2016). She has co-founded Quite Ourselves, an artist collective, seeking sustainable mobility in life and art creation.

Jake Kennedy’s poetry has appeared in The Malahat Review, Brick Magazine, McSweeney’s Internet Tendency, and Best American Experimental Writing. He is also the author of three collections of poetry: The Lateral (2010, Snare Books), Apollinaire’s Speech to the War Medic (2011, Book*hug), and Merz Structure No. 2 Burnt by Children at Play (2015, Book*hug). Kennedy is the recipient of the Robin Blaser Award, the Robert Kroetsch Award for Innovative Writing, and the bpnichol Chapbook Award. His most recent book—a chapbook published by Gaspereau Press in 2021—is entitled The Rublev Horse.

Paola Poletto’s studio interests include photography, drawing, writing and creative collaboration. On long-form durational projects such as OOL (2018–), StudioPeePee (2012–20), and Kiss Machine (2000–05), she is co-editor/curator/artist of visual and literary reflections on creativity, social practice, place making and care. Her practice is complemented by doctoral research at Toronto Metropolitan University’s The Creative School. As Director of Engagement and Learning at the Art Gallery of Ontario, she oversees opportunities to connect people with art and making art.

Moderated discussion on September 22 with Alice Ming Wai Jim, Professor and Concordia University Research Chair in Ethnocultural Art Histories in Montreal, Canada. She is co-editor of the journal Asian Diasporic Visual Cultures and the Americas (Brill with Concordia and NYU). An art historian and curator, her research on diasporic art in Canada and contemporary Asian art has generated new dialogues within and between ethnocultural and global art histories, critical race theory, media arts, and curatorial studies.

In addition to the Korean Cultural Centre and the Embassy of South Korea, the artists thank the Canada Council for the Arts, Ontario Arts Council, The Creative School at Toronto Metropolitan University, and Okanagan College for their assistance; the United Church of Canada Archives, Soocha Tea, Trinity Square Video, Toronto, for co-premiering Ivetta Sunyoung Kang’s Proposition 2: Index for vitrine gallery, September 8 – November 9, 2022, and several others for their invaluable knowledge, time and support.

The Korean Cultural Centre Canada (KCC) and the Embassy of Korea are pleased to present Entanglements (Tea, Maybe). Earlier this year, the KCC called for curators to submit new exhibition proposals to celebrate our solid friendly relationship between Korea and Canada to mark the 60th anniversary of the diplomatic relations between the two countries in 2023. The call also aimed to open up critical dialogues between Korean and Canadian curators to envision a deeper connectivity and sustainable collaboration between the two countries for the next generation to come.